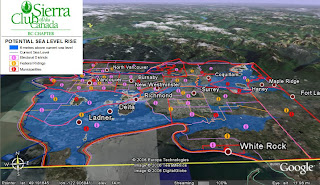 A new BC government report says that we should prepare for sea level rises of 0.5 metres by 2050, 1.0 metres by 2100 and 2.0 metres by next century—and re-evaluate again in three years to see if these figures hold. They might be worse.
The writers of the report are not worried yet about increasing storm intensities or storm surges on the north coast, but recommend we monitor the situation and see how things evolve.
Just try not to build the dyke (or the town) too low.
See BC Ministry of the Environment - Climate Change Adaption Guidelines - Draft
at Friday, May 06, 2011 No comments:

If Canadians want to get anything done, they'll have to force Harper's hand or manage change through other means.  The international, the provincial, the local, the organizational and the personal all remain as options for moving forward.

Stephen Harper has a majority government, but he is still vulnerable to international pressures.  Wherever they might come from.  It's conceivable that international pressures will build up in circumstances where the climate continues to hand around climate disaster worldwide--as it now seems prepared to do. 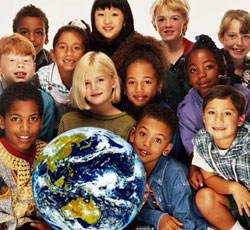 It is also true that in Canada, most of the environment is in the charge of the provinces.  Provinces can set their own priorities on the environment in contradiction of Stephen Harper's business as usual approach.

For those of us who want to save the planet for our children and grandchildren, there's a heck of a lot of work to do and huge challenges.