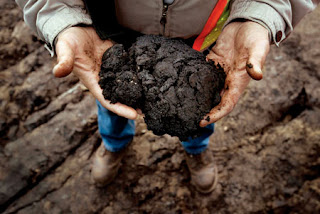 Stephen Harper’s plan to fight climate change through a “targeted approach” is the least effective, the most expensive and most difficult to implement of the plans proposed by ’s national parties.  The Greens, New Democrats and the Liberals all favour a market-based approach, the cap-and-trade system.  According to a report by ’s climate change secretariat, the Conservatives plan, such as it is--and there is no guarantee that they are the least bit serious about it--would be the worst possible solution for the economy and the environment.
This approach requires many initiatives, likely by three different orders of government, with the associated administrative costs.  And because it does not use market forces to find the lowest-cost emissions reduction opportunities, it is inevitably a higher-cost approach than those based on emissions trading. . . . This option likely also provides the least certainty for meeting a target." 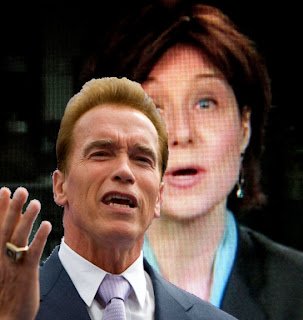 They were going to join the Governator in  and others in a carbon-trading scheme, but now they say they need further discussion.  The new government of Christy Clark has already found time to endorse an environmentally dubious (“I can see it from space!) open-pit gold and copper mine in the interior which gave even Stephen Harper pause.
But if it’s green, , and in British Columbia, then it needs further “fulsome discussion.”
And if we’re still talking about it, then we’re not doing it, right, Premier Christy?
See B.C. has become straggler in battle against greenhouse gases - Vancouver Sun
at Wednesday, April 13, 2011 No comments: 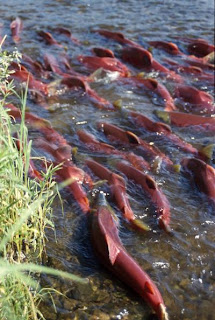 Nature's going to be doing a little thinning out in the coming centuries.

Climate change is tipping the Ark and some species are falling out.  Other species dependent on those species are preparing to starve.

Scientists have observed this going on for some time now.  Here's a current story in the news.  (Strong salmon hearts may hedge against climate change-CBC.)

Yep, the story says, some species of salmon with special characteristics allowing them to survive climate change will survive.  Others won't.  In the end there will be fewer species of salmon.  That's not really a victory.
at Sunday, April 03, 2011 No comments: